The trend right now in fitness is for trainers to advocate “Total Body Weight Exercise” as being the magical cure for every person wanting to lean up and get buff.  But what’s not being openly talked about is the casualties that line this path.  I want more fitness professionals and their clients to be mindful about what “total body weight exercise” really means.

It is true that the more muscles you get working at any given time the more calories you burn. That makes intrinsic sense.  It is also true that your body moves on it’s own without you thinking about it, all day, every day in a multiplicity of complex multi-movement patterns.  All of that is good stuff.

Now, what most athletes, many turned fitness professionals fail to take in to consideration is the different types of learning and their effect on motor co-ordination and the ability to perform an exercise correctly.  There are varied learning types that people can be generally classified under, like visual or auditory.  Visual learning style, means you see someone do it and you can then do it.  Auditory learning style means you hear a list of directions and you can then sequence them back correctly.  Most athletes are kinesthetic learners, that means they learn by physically doing a task.  That is not to say that a visual learner cannot learn to perform the same task as a kinesthetic learner, but it means that there will be a higher learning curve for them on a task of physical nature.  So trainers, just because you can do 100 picture perfect burpees in a row at speed, does not mean that your client should or can even if they want to.

Full body weight exercise requires a base level of strength.  The building block structure should be first: 1) establish stability – the means by which the body can maintain the integrity of its joint structure under most forms of stress.  Stress itself can be constituted in training terms by speed (how fast or slow is the pace), load (how much weight you’re lifting) and duration (how long are you lifting each load.) 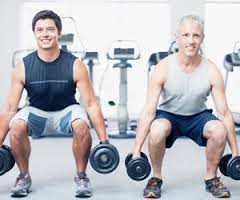 Everyone has helped a friend move; imagine you lift a heavy box and you have to stand still and hold it until your friend gets his car. It would make a difference to your back and shoulders if that car were right out front or parked two blocks away.  Now imagine you and your friend have to lift a really heavy box – but you only have to move it ten steps in a straight line.  Chances are – you will both move as quickly as possible.  Lastly, imagine you are carrying a heavy box that requires you to move down several flights of stairs – you are under load and the duration will be long and the pace will be slow.  All of these scenarios are slightly different from one another in the demands they make on the body.  And everyone can relate to feeling stiff and sore after a move.  Proper training can get you to where none of those scenarios would be painful.  You would be stable in maintaining your joint integrity.

The next phase of training should be symmetry. Is each individual joint and side equal to the tasks demanded on the body?  Anyone ever tried to carry a toddler in one arm and lifted a bag of groceries from the back of a car simultaneously?

The last phase is dynamic performance.  The ability to do intense, full-body, full-ROM exercises under various forms of stress.  Yes, FBW exercises develop dense muscle mass more efficiently and effectively than any other form of exercise.  But is it appropriate for everyone to go straight to the hardest, most bad-ass place first?  An athlete has been doing crazy compound loaded movements for a lifetime – the brain actually functions differently (this is another topic for a future blog in and of itself!) To expect a client to perform like that before proper foundations are put down is a recipe for disaster.  Anyone remember Tae Bo?  Yes, great results are achieved but at what cost? My goals are not for people to feel good for the one year they did Cross-Fit.  I want people to be equal to the physical challenges in their daily lives and to feel good and look great for the duration of their years! 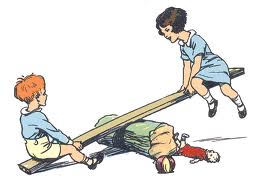 Imagine you at age seven.  Now see yourself on a see-saw.  You are alone; your butt is low to the ground and it feels like a 1000 pounds.  On the other end sticking up in the air, seemingly far away is the empty end of the beam.  As you gaze longingly up into the blue sky, squinting at the warm afternoon sunbeams, a friend comes by.  This could really get going now; you could overcome Newtonian inertia and have a great playtime. But the friend sits down right in front of you and they too are facing the tilted empty distant plank.  So you ask the friend to go sit on the other end instead and the board comes into neutral and now, you can control the direction, pace and fun.

“What is the point of all this,” you ask? It’s simply a metaphor for balance.  I continually, see people who need work on balance. I’m not talking about being able to stand on one foot for thirty seconds.  I’m talking about the guy who’s working a 60 hour work week and then comes in at 7pm to do Boot Camp Class or the yoga die-hard who thinks stretching alone can take away all your aches and pains.

It is shocking to me how many people never stop to consider how much they are demanding from their bodies and yet, have absolutely no comprehension of how the system is actually functioning.  Consider a race-car driver who has no understanding of auto-mechanics but who simply wants to get in the car and go fast…predictably, a crash is probably in the near future.

I know many serious cyclists, marathoners and triathletes, many of whom just to do the training for their events are continually putting their bodies under a lot of stress.  It doesn’t feel all that demanding, because like all things you get used to it. Go back to imagining the kid on the teeter-totter.  If you sat in the down position for several hours, that would begin to feel normal. But your playmate brings the board into balance; it now feels “scary” and “awkward” because you just haven’t done that before, and yet, it’s doing what the toy was designed to do.

So let’s go back to that work-a-holic guy in the bootcamp class.  I’m not saying he needs to give up working out.  But I would recommend finding a workout routine that works on strength training but without the fever pitch pace.  And maybe a yoga class – NOT HOT OR POWER YOGA and a little more sleep.  We want to balance the plank.  Now for the lady in yoga class, who keeps complaining about back pain and thinks more stretching and more yoga is just what she needs.  I would recommend that lady find a great core class and build some muscle mass in order to stabilize her joints, instead of asking her tendons and ligaments to keep over-extending.  And you athletes – find some Hatha yoga, or even a basic breathing relaxation technique class, and let your system rest and repair itself so it can keep performing optimally. You may think that a boot camp class would count as “cross-training” because you’re not technically running or cycling.  BUT if your muscles and joints are doing rapid fire movement and your heart rate is in your training zone, to your nervous system, you’re still doing endurance training.

As Indiana Jones says, “It ain’t the years honey, it’s the mileage.”  If you want to keep playing forever, you have to begin to understand how your system is designed.  If you’re giving it a lot of one thing, give it the things it doesn’t have!  And if you need a playmate to help balance that board…contact me!  Deborah@VicFitLA.com!